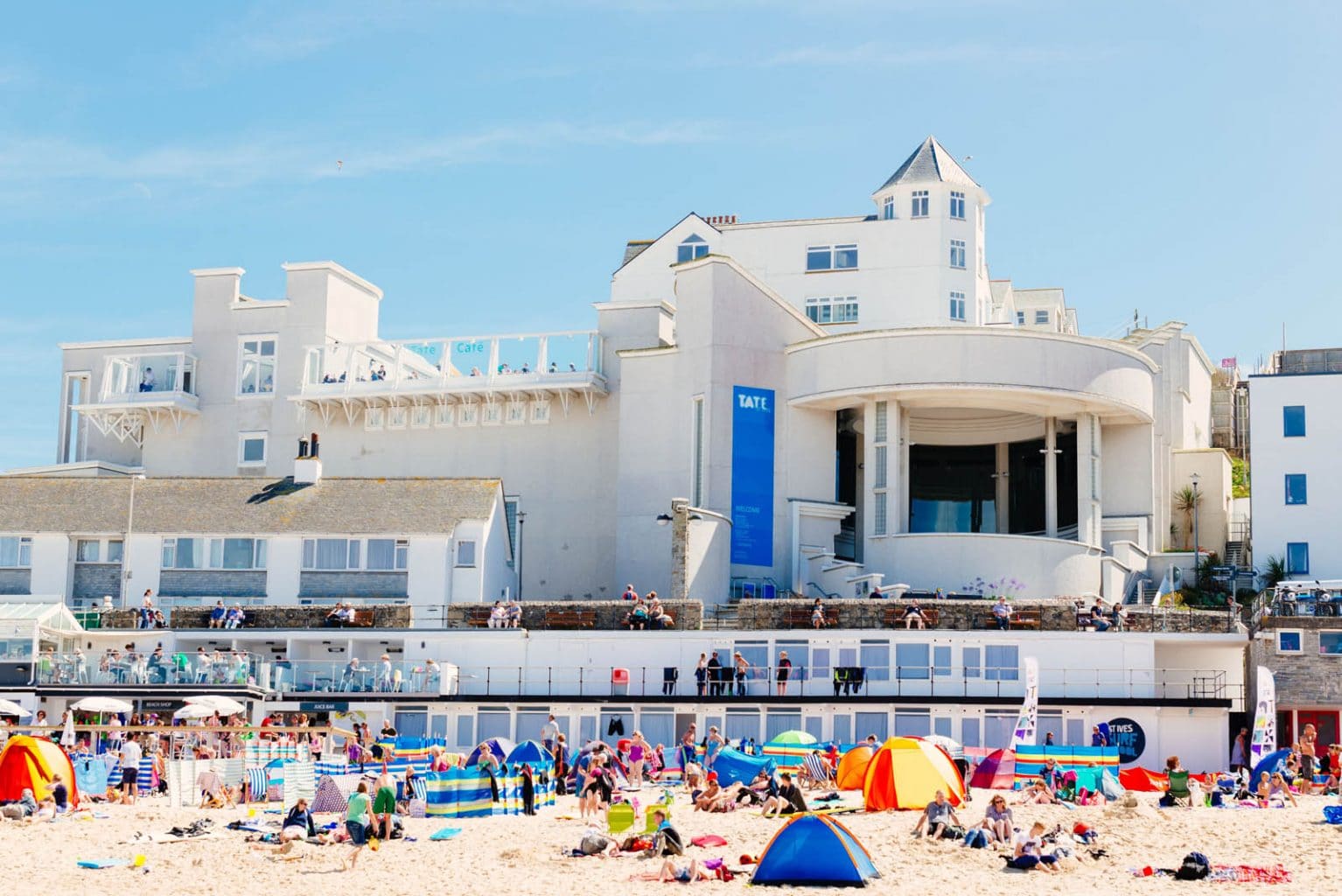 One of the many wonderful things about West Cornwall is the amount of quality attractions packed into a small area. When we started to gather suggestions for this guide, we found it really tricky to pin it down to a few places!

However, we don’t want to swamp you with our enthusiasm for West Cornwall; so here are just a few of our favourite places to visit. We’ve chosen ones which you can comfortably drive to within an hour of Polmanter (we look at attractions further afield in another blog). If you have any other recommendations, please let us know!

On the Cornish art trail

The unique clear light of St Ives has attracted artists for generations, as well as visitors wanting to discover and admire Cornwall’s art heritage.

Tate St Ives, the iconic gallery overlooking Porthmeor Beach, is on most people’s Must Visit list. It’s recently been refurbished to create more gallery space; and when it fully reopens this autumn it will have a permanent exhibition about St Ives and a programme of temporary displays. The Tate’s sister gallery, the Barbara Hepworth Museum and Sculpture Garden is a hidden wonder in the middle of town. The renowned sculptor moved to St Ives with her family when World War II broke out, and she transformed the gardens around Trewyn Studios into this beautiful backdrop for her sculptures. A wonderful place to explore.

Cross over the peninsula to Penzance, and visit a trio of galleries: Penlee House Gallery and Museum, and the Newlyn Art Gallery and Exchange. The former tells the story of the Newlyn School of artists and focuses on the history of art in the area; the other two sister galleries exhibit more modern art.

If you’d a painting or a print as a memento if your holiday, St Ives’ winding streets have a plethora of small private galleries covering all styles and media.

There are so many lovely gardens in Cornwall to choose from. The Gulf Stream is kind to us, giving us a generally warm climate all year; and we’re able to grow all sorts of exciting sub-tropical plants. St Ives itself has lot of lovely little hidden gardens scattered around: enjoy a quiet pasty or ten minutes with a book in Trewyn Gardens.

Penzance is just a short drive from Polmanter, and it’s home to two of West Cornwall’s best gardens. If you enjoyed the Hepworth, head for Tremenheere Sculpture Gardens, just east of Penzance. The 22-acre gardens are in a sheltered valley which creates an ideal environment for spectacular sub-tropical planting. The dramatic flora forms a stunning backdrop for contemporary art installations. It’s a great place to explore with kids, with the added bonus of an excellent cafe, as well as a nursery shop selling plants by Surreal Succulents.

National Trust-managed Trengwainton Garden is on the other side on Penzance. Follow the winding paths, scamper in the orchards or on the large grassed area (but beware of the ha-ha…), admire the incredible views across Mounts Bay, or wander around the immaculate walled kitchen gardens. Look out for events at Trengwainton, as they always do them incredibly well. And again, there’s a great cafe…

Cornwall was once the world centre for tin and copper. Centuries of mining have transformed our landscape, and West Cornwall is dotted with lone chimney stacks and ruined engine houses. Cornwall’s mining district is now a World Heritage Site, preserving this fascinating history. The new BBC adaptation of Winston Graham’s Cornish Poldark novels has raised a lot of interest in mining (and scything…), and there are several great mining centres near Polmanter.

Geevor Tin Mine is in Pendeen, a few miles west down the pretty coast road. The largest preserved mine in Britain, this large and absorbing centre takes you from an 18th century mine (where you can go underground) right up to modern mining (Geevor closed only a few years ago in 1990). There’s a lot to see and do, and it’s very good at interpreting mining for younger visitors.

For the real Poldark windswept clifftop experience, visit the National Trust-managed Botallack, where scenes from the series were filmed. The National Trust Levant Mine is nearby, with its old mine buildings perching dramatically above the ocean, and you can see a working beam engine there.

Don’t put your National Trust card away yet, as East Pool Mine is just up the A30. Pool, Camborne and Redruth is another mining area worth exploring. It’s also always worth visiting Heartlands while you’re in Pool, as there’s a free mining exhibition and a marvellous adventure playground. Call into the Red River Café, housed in a former workshop, where the tables are fitted around the old carpenters’ machinery!

Who would have thought a sleepy Cornish cove was once a global communications centre? Find out how Cornwall helped shrink the world and create our modern connected lives at the fascinating Porthcurno Telegraph Museum. It has lots of interactive stuff for kids, and well-presented history for older visitors. While you’re at Porthcurno, there’s also a great permanent exhibition at The Minack which is open during the day for visitors to explore the famous stage and outdoor auditorium.

Truro is about 20 miles away from St Ives. A lively and buzzy little city, it has great shops, bars and restaurants, and a superb example of a county museum. The Royal Cornwall Museum has a permanent Cornish exhibition, the outstanding Rashleigh collection of minerals, and a programme of temporary displays and events. It’s very family-focused, and there’s always something engaging for the kids.

If you’re here between Easter and late October, you can visit our local St Ives Museum to find out more about the town and its history.

St Michael’s Mount gets a category to itself: there’s no way to neatly box this beautiful tidal island! Its steep slopes are crowned by a medieval castle and clothed in lush, near-vertical sub-tropical gardens, tended by abseiling gardeners. The island is home to a small community made up of families who work for the estate.

It’s a short drive to Marazion, which has a few car parks. Walk to the island at low tide, or catch one of the passenger ferry boats when the causeway’s covered. Ideally, time it so you walk one way and boat the other. It’s possible to explore the island’s shops and cafes without making the climb to the top and the castle; however if you can, it’s definitely worth it. Then, a cool drink or meal at The Godolphin Arms in Marazion, looking back across the water to the island…