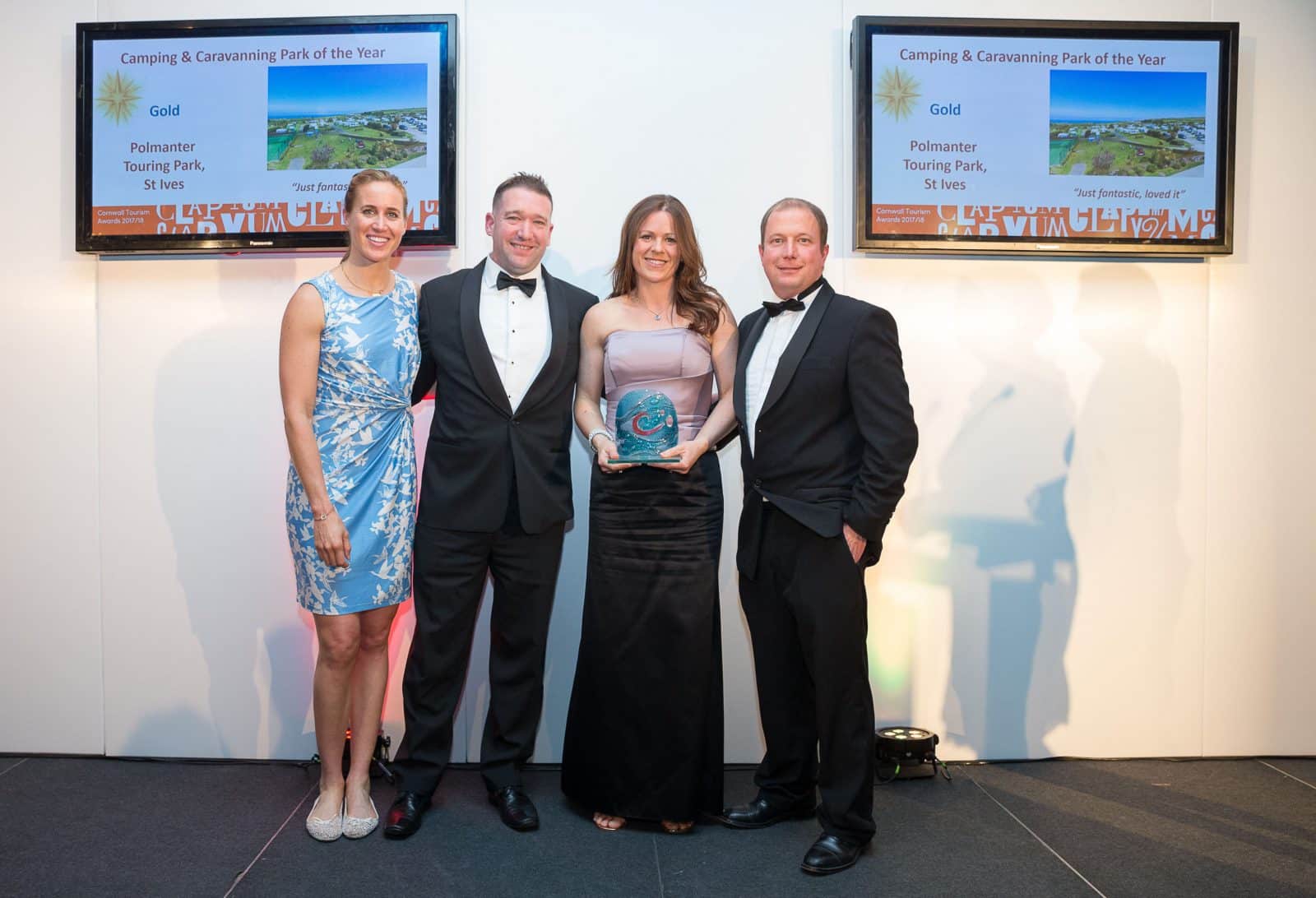 As many of you know by now, Polmanter won the gold award at the Cornwall Tourism Awards earlier this month. Thank you so much to all our guests and friends who have been in touch to congratulate us – you’ve all said such lovely things!

The Cornwall Tourism Awards is now in its 16th year, and it really is the industry Oscars for those of us in the holiday business. With 26 categories, it covers so many aspects of Cornish tourism, and we were shortlisted for the Camping and Caravanning Site award. With Cornwall fast becoming one of Europe’s most-loved holiday destinations, the standards are high and the competition fierce…

As the 2nd of November approached, we were getting pretty nervous. This award mattered to us, as we’d all worked so hard on developments at Polmanter, and we knew it would be amazing to have the team’s efforts recognised.

At last, the day arrived, and Phill and I prepared to head off to the Headland Hotel in Newquay, along with assistant manager Jonathan and his partner Tracey (whom many of you will recognise from Reception), all dressed up and ready to party.

We’re confident that we run a good campsite. The staff work incredibly hard and our lovely guests are appreciative. This year, we’ve really focussed on improving our accessibility and family-friendly facilities. However, there’s nothing more nerve-wracking than having all your efforts under scrutiny; and the competition in this category is fantastic (including Phill’s brother Neil’s campsite!)… We live and breathe Polmanter, and really want to see the site recognised as one of the very best.

When we arrived at the beautiful Headland Hotel in Newquay  we were delighted to learn that Cornish hero and Olympian Helen Glover would be the guest speaker and presenting the awards, and it was fantastic to hear about her experiences and her love of Cornwall, particularly our native West Cornwall, where she grew up.

Then the announcements started… To be fair, they went through them at a good pace (no Oscar-style lovie-ness in Cornwall) but it seemed to take forever. At last it came to the award for Camping and Caravanning Park of the Year – and well, you know the result! It was so exciting and such a privilege to collect the award on behalf of Polmanter and its fabulous team, and even better to hear our campsite described by the judges as “just fantastic!”

Neil and Annette’s campsite Trevalgan Touring Park won the bronze award – an incredible achievement as they only took over the site in 2013. Sandwiched between the two Osborne sites was Dolbeare Park in Saltash, a site we’d definitely recommend to those who want to stay on the Cornwall-Devon border.

It turned out to be a great evening overall for accommodation in St Ives, with the Carbis Bay Hotel also picking up three awards.

The 2017-18 winners from Cornwall will now be fast-tracked to the South West awards, and we’ll find out in February how we’ve done. We’ll let you know, and in the meantime, thanks again for your support!