Going to the theatre in St Ives and West Cornwall 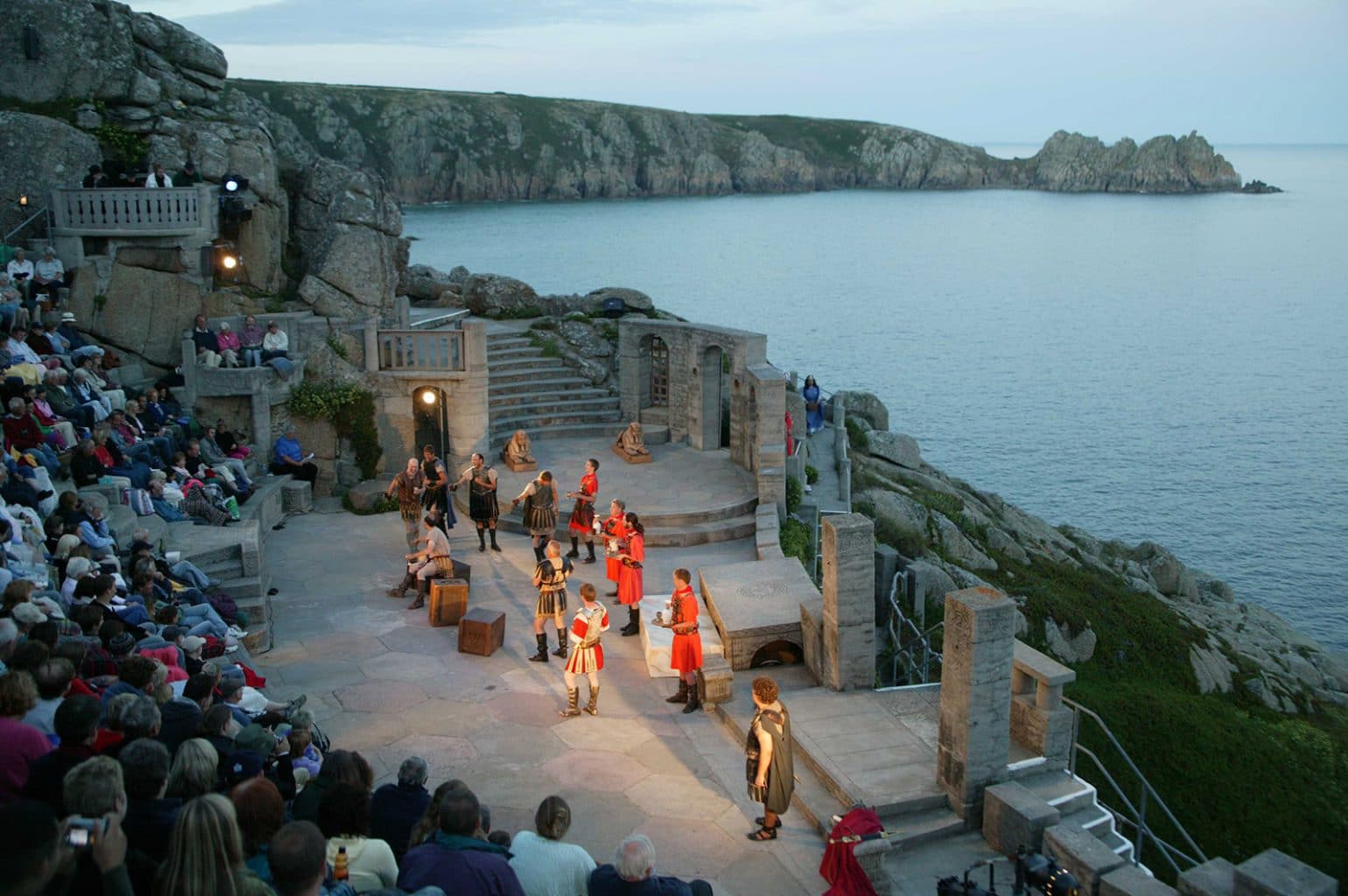 West Cornwall has a reputation for being really artistic – and this extends to the performing arts. There are so many great theatres and companies around here that there’s bound to be a show that catches your eye during your stay. From talented kids to vertiginous cliffs, here’s our guide to a great night out at the theatre in Cornwall.

St Ives Theatre is housed in a former chapel in the town, and is the base of the energetic Kidz R Us. Rethink any preconceptions you may have about kids’ theatre being just for kids to watch: a Kidz’ production is a real treat for any audience. The talent, hard work, and high production values of cast and crew are astounding; and they’re given the stamp of approval by none other than Sir Tim Rice, who is their patron. Founder and chair is Phil Barnett, a well-known local hero who recently found national fame on BBC’s The People’s Strictly for Comic Relief. This summer’s shows are Our House: The Madness Musical, and a youth theatre version of Disney’s popular film, Aladdin Jr.

Don’t overlook St Ives’ other theatre: the BoatHouse Theatre in St Ives is small and surprising! This lovely little place is near Harbour Beach in town, and is great fun.

One of West Cornwall’s most original theatre experiences comes from the incomparable Rogue Theatre. A completely different style of theatre, their shows guide you through the trees to various performance spaces in Tehidy Woods, and earlier in the summer at the Lost Gardens of Heligan, and immerse you in a different world. A Rogue production always manages to be both magical and mischievous, never losing their warm Cornish humour while transporting you to a mystical new world. We love them. Their shows run throughout the year, with seasonal themes; and keep a look out for Rogue Kitchen sessions for wild woodland food…

One of Cornwall’s most famous landmarks is the Minack Theatre, an open-air stage and auditorium perched on the clifftops above beautiful Porthcurno Beach. The Minack runs a diverse programme every summer (with guest appearances from passing gulls, ships, and dolphins). The theatre was hewn from the granite cliffs by Rowena Cade, whose family lived in a house on the cliffs. Along with her gardener, she started creating her unique theatre as a young drama enthusiast in 1931, and continued until her death in her eighties. Take a picnic, a blanket, and clothing for every possible type of weather, and enjoy this unique theatrical experience.

For a fun family show, try to catch a Squashbox Theatre performance. Penzance-based performer Craig Johnston combines music, puppetry and storytelling to create really engaging productions for kids (and big kids) of all ages. Squashbox is often found performing at the Minack Theatre during the day during school holidays, to a theatre full of giggling children.

We’re always optimistic about the weather, and the Minack is not the only outdoor venue in the area. Penlee Park Open Air Theatre is in the gorgeous sub-tropical Penlee Gardens in Penzance. From Shakespeare to stand-up, and concerts that range from classical to folk, Penlee delivers a lively and varied programme. If you can’t catch a show, head towards Penlee Park one day anyway: it’s one of Penzance’s loveliest green spaces, and has a top playground, an excellent café, and is home to the Penlee House Museum and Gallery.

Head up the A30 to Truro and the Hall for Cornwall, our county theatre. HfC puts on all manner of shows, from touring West End productions to big-name stand-up. Ballet, opera, musicals, comedy, tribute acts and actual acts… Have a look to see what’s on when you’re here. Truro is a good place for a night out, with a great selection of bars and restaurants.

The recently-refurbished Regal Theatre in Redruth is an Art Deco style cinema which shows both films and live performances. If they’re free, book one of the boxes in Screen 1 and enjoy waiter-service during the show. (The Royal Cinema in St Ives is one of the Regal’s sister cinemas, both belonging to the Merlin Cinemas group.)

Cornish touring company Miracle Theatre is a touring company that performs a mixture of new plays, classics, and inventive Shakespeare productions across the county and “upcountry”. Their shows are always lively and original, and definitely worth catching if you’re here at the right time.

Renowned Cornish company Kneehigh Theatre has been putting on world-class productions for over 30 years. In 2010, Kneehigh launched “The Asylum”, a huge portable performance space in the style of a nomadic tipi (with a bar). It’s not in use this summer; however have a look at their programme to see when they’ll be performing in Cornwall at venues such as The Minack. For more classy Cornish theatre, look out for productions by Illyria from Sennen and Trebiggan Productions from Truro.